Hi! I'm Steph, a freelance writer for hire based in Australia. I'm an avid reader and love all things bookish! My blog is all about the written word. 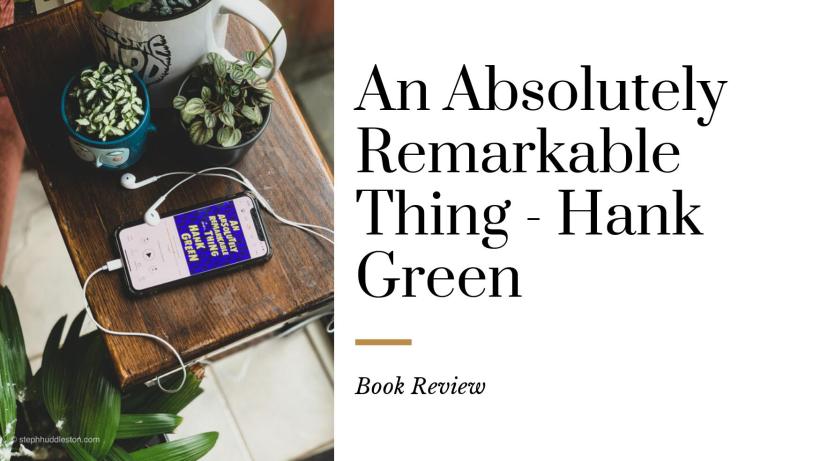 A sci-fi novel that is unexpected, funny and poignant.

The Mister and I listened to several audiobooks together on our recent travels to New Zealand. We’ve both been fans of Hank Green for some time, and have read several of his brother’s novels so thought it was time we read Hank’s debut book.

Who is Hank Green?

I don’t always include this segment in my book reviews, but in this case I think some author information will provide you with some important context when approaching this book.

So who is Hank Green? A science guy, musician and educator who’s primary platform is YouTube. Hank has made and been involved in the production of many incredible Youtube shows including: SciShow, Crash Course and Vlog brothers.

If you’re not familiar with who Hank is, you have probably heard of his brother John Green. John is the author of several novels including The Fault in Our Stars. Together the two brothers started vlogging (video blogging) to one another in 2007 on their channel Vlogbrothers and became internet famous.

Today, Hank Green is one of the most influential YouTube educators on the platform. He is a co-founder of Project for Awesome (a charity) and the online video conference Vidcon.

He’s also hilarious and his videos are high quality. Some themes within An Absolutely Remarkable Thing are more convincing because it is Hank who is writing the book. I’ll return to this point later… for now, let’s get to the review!

What is An Absolutely Remarkable Thing About?

When 23 year old April May discovers a giant sculpture at 3am in New York city she’s intrigued. She is at once delighted by its appearance, like a samurai armour clad ten-foot transformer. She calls her friend Andy and together they inadvertently make a viral video that takes the internet, and the world by storm. Carl, as April has dubbed the statue is one of many that has appeared in cities across the world.

The world is wondering what to do about the Carls, why they’re here and what they want. Soon April finds herself having to deal with the consequences of her and Andy’s video, and the media attention that comes with it.

What I liked about An Absolutely Remarkable Thing?

April May is a highly entertaining character, flawed and self reflective its a delight to see the world through her eyes. Seeing her navigate a new world of fame and the impact it has on her relationships, identity and safety is fascinating.

This novel is sci-fi, but not as I had previously experienced it. An Absolutely Remarkable Thing is deeply rooted in exploring problems society wasn’t experiencing ten, even five years ago.

The problems, and benefits that social media can have upon a persons identity is evident in April-May as a character. The story is told from her perspective and she changes significantly from the beginning of the novel to the end.

There is an issue on social media, and the internet more broadly with people ‘marketing’ themselves to gain better engagement with their product. The rise of the ‘influencer’ as a career is assessed carefully within this book and leads us to question, do we really see people (or ourselves) as holistic humans online?

By that I mean, we only see a facet of a person online, the way they choose to present themselves. We can’t then fully appreciate the beauty and complexity of people and the world based on what we see through the lens of media. Social media has a power to both unite and divide. I really enjoyed the way Hank Green explored this theme throughout An Absolutely Remarkable Thing.

As the Mister and I listened to the audiobook of An Absolutely Remarkable Thing I was really impressed with the narration, performed by Kristen Sieh and Hank Green. Kristen captured the voice of April-May. Her voice carried the emotions of the novel perfectly and I hope she will be narrating the sequel.

What I liked least about An Absolutely Remarkable Thing?

Oh the cliffhanger is cruel at the end of this one. Hank Green, that was both mean and admirable.

Mean, because the book was released in 2018 yet the sequel A Beautifully Foolish Endeavour wasn’t slated for release until July 2020. Fans have been waiting a long time for this.

Some fans didn’t realise going into An Absolutely Remarkable Thing that it was book one of a two book deal. If you’re expecting a stand alone story, this isn’t one.

The ending of this book was well done, which is it is admirable. I personally quite enjoy cliff hangers as they carry you over nicely until the next book with speculating which is entertaining.

Thankfully, I (and you) don’t have to wait too long until the sequel A Beautifully Foolish Endeavour arrives later this year.

An Absolutely Remarkable Thing is marketed as adult fiction sci-fi however there are some older teenagers who may find this novel interesting and relevant. The book contains some mild swearing and sexual content. If you’re an adult who enjoys sci-fi or social commentary this book is one you’re likely to enjoy.

If you’re looking for clear-cut answers and a satisfying ending, you probably won’t find that here.

All that being said, I really enjoyed An Absolutely Remarkable Thing. As a twenty-something myself I found April-May’s desire to make a change for good in the world relevant to me.

Where can I get a copy?

* If you’d like to read An Absolutely Remarkable Thing it is available at Amazon here.

*Should you choose to make your purchase using the link above I will receive a small commission, at no additional cost to yourself. Please bear in mind that I only link to products and companies that I personally believe will benefit my readers. Thank you for your support! If you’d like more information about affiliate marketing please visit my disclosure page.

Thanks for reading today’s review. If you’ve read An Absolutely Remarkable Thing tell me what you thought of the book by commenting on this post.

What’s been a stand out read for you this year?

If you haven’t had enough books, come say hi to me on social media by searching @stephhuddlestonwriting or by clicking the buttons below.

Steph Huddleston Hi! I'm Steph, a freelance writer for hire based in Australia. I'm an avid reader and love all things bookish! My blog is all about the written word.

This site uses Akismet to reduce spam. Learn how your comment data is processed.